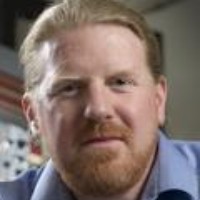 Dr. Svensson's research uses the atomic nucleus as a laboratory for studying a variety of physics topics, ranging from the microscopic description of collective excitation modes in finite quantum systems, to precision tests of the electroweak Standard Model of particle physics and the search for ...

Dr. Svensson's research uses the atomic nucleus as a laboratory for studying a variety of physics topics, ranging from the microscopic description of collective excitation modes in finite quantum systems, to precision tests of the electroweak Standard Model of particle physics and the search for new physics beyond it. These studies are performed with state-of-the-art multi-detector arrays of high-purity germanium (HPGe) crystals to detect the energetic light, or gamma-rays, emitted by the atomic nucleus. These detection systems include the 8p Gamma-Ray Spectrometer and the TRIUMF-ISAC Gamma-Ray Escape Suppressed Spectrometer (TIGRESS), a new facility, for which he is the principal investigator, that was constructed through an $8M grant received from the Natural Sciences and Engineering Research Council of Canada (NSERC) in 2003. He is also the principal investigator for the development of Gamma-Ray Infrastructure For Fundamental Investigations of Nuclei (GRIFFIN), an advanced new high-efficiency $8.8 million gamma-ray spectrometer for which Canada Foundation for Innovation (CFT) funding was received in August 2011. His group, together with their national and international collaborators, operate these large gamma-ray spectrometers at the Isotope Separator and Accelerator (ISAC) radioactive ion beam facility at the TRIUMF laboratory in Vancouver, the world’s highest power on-line isotope separator facility. Analysis of the data from these experiments is carried out in-house at the University of Guelph. His recent and current research activities include:

Studies of the evolution of nuclear shell structure in rare isotopes through decay and in-beam gamma-ray spectroscopy at ISAC. These measurements provide new insights into the behaviour of the complex nuclear quantum many-body system and deepen our understanding of the processes by which the chemical elements have been, and continue to be, synthesized in explosions of ancient stars.

High-precision lifetime and branching ratio measurements for a special class of nuclear transformations known as superallowed Fermi beta decays. These measurements improve our knowledge of the breaking of an approximate symmetry of the strong nuclear force known as isospin that is caused by Coulomb and charge-dependent forces in the nucleus. They thus provide demanding tests of our current understanding of the fundamental interactions of the basic building block of nature embodied in the Standard Model of particle physics.

Research and development to enable a search for new fundamental interactions of nature that violate the symmetry of the current laws of physics with respect to the direction of time through ultra-sensitive measurements of electric dipole moments (EDMs) in radon isotopes. The discovery of a non-zero particle EDM would represent a "smoking gun" for the violation of time-reversal symmetry in nature and have profound implications for our understanding of the most fundamental origins of matter in the universe.