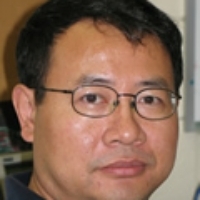 In the first area, their effort has been focused on the polyacene semiconductor thin films. Three projects are underway: A. in situ and exsitu carbon 1s polarization dependent NEXAFS studies on the tetracene and pentacene growth mechanisms on various solid substrates; B. gas phase NEXAFS of the polyaromatic molecules and theoretical simulation (StoBe code); C. exsitu grazing-incidence X-ray diffraction (GIXD) study on the thickness dependence of the expitaxial structures of tetracene on reduced silicon surfaces. The polyacene thin film NEXAFS and GIXD projects are in collaboration with Qin (U of G) group. Systems studied include tetracene and pentacene on H/Si(001) (wet chemistry method) and SiO2 substrates; and tetracene on flat and specific terraced H/Si(001) substrates. The polyacene gas phase project aims at developing a thorough understanding of the C 1s near edge X-ray absorption spectroscopy of these molecules for application as a structural tool in studying the polyacene semiconductor films.

In the second area, they've been collaborating with Lavoie’s group (IBM, Yorktown Heights) to investigate the XANES and XAFS signatures of the industrial nickel silicide layers targeted for new generations of nanoscale electronic applications. Recently they have demonstrated that the method they're developing is capable to identify the epitaxial phase of an interface region with thickness of 1-3 nm, where conventional diffraction methods have not been effective.

The third research area, the Arsenic speciation using XAFS endstation at CLS HXMA beamline has been carried out in collaboration with N. Chen (CLS), G. Demopoulos (McGill), and J. Rowson (AREVA Res., Canada), and S. Glasauer (Dept. of Land Resource Sci., U of Guelph). In these studies they have systematically studied the pH, temperature, and aging time factors in the formation of scorodite phase under the geochemical conditions mimicking that at uranium mine tailing process facilities.

A new research project is in progress which will invoke x-ray absorption spectroscopy studies on material electronic structures under high pressure.