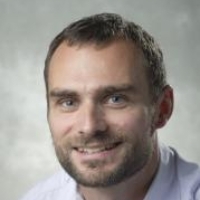 Dr. McDougall is currently working on a social and political history of East German football between 1945 and 1991. The popular image of sport in communist East Germany is one of remorseless Olympic success inspired by systematic doping and advanced programs of talent identification and training....

Dr. McDougall is currently working on a social and political history of East German football between 1945 and 1991. The popular image of sport in communist East Germany is one of remorseless Olympic success inspired by systematic doping and advanced programs of talent identification and training. Football plays little part in this controversial story. The communist authorities found it much harder to control the most popular sport in East Germany than they did other medal-rich but comparatively obscure sports. The "strange history" of East German football saw clubs moved from one town to another on communist party orders and extensive secret police (Stasi) surveillance of players and coaches. Yet, to the frustration of party officials, football retained a relatively high degree of autonomy within the confines of the communist dictatorship. It became an arena of broad-based, but low-risk, resistance to authority in East Germany, as well as a means of keeping alive identities (local, regional, and national) that did not necessarily conform to communist ideals.

McDougall's research examines the communist failure to bring either order or success to East German football – how and why the unpredictability and popularity of the "beautiful game" allowed it to at least partially defy political manipulation. He is particularly interested in the tense, multifaceted relationship between authority and resistance in East Germany, as witnessed in interactions between the state (represented primarily by the party and secret police) and society (represented primarily by fans and players). By following a thematic approach - including such topics as fan culture as an expression of possible political dissent; football as a mass participatory sport; the rise of hooliganism; and the attractiveness of West German football in the East. He hopes to illustrate that football was not merely imposed on East German society by an all-powerful 'totalitarian' dictatorship. Rather, it was a site of dialogue and negotiation, of "give and take" between the authorities, whose power was much more disjointed and multi-layered than some scholars would allow, and the people, who saw football as an important means of maintaining a sense of their "own interests" (Eigen-Sinn). The extensive, but ultimately limited, influence of the East German dictatorship on football also offers broader insights into sport's ability to subvert, whether consciously or unconsciously, authoritarian attempts to mobilize it for political purposes. The continued relevance of this topic was displayed most recently in the various controversies that surrounded China's hosting of the 2008 Olympic Games.